The Poetics of Hope

"Tomorrow we shall see what has changed in this town," said Baz.  "I wonder what it will be."

They woke to the sun shining down on them...In the night a pear tree had flowered, sprouting white and pink blossoms.

"It is nothing that would not have happened anyway," said Baz.

"But maybe no one would have noticed," said Tadis.  "The poet has opened their eyes.  He has made them see what is there.  That is his power."

(The Magician's Apprentice, by Kate Banks)

Long sing the Poet, I say,
and long bless God.

Long may my heart behold
and long may I listen wide

to the full feathered wind of love
that tousles my ease and mind. 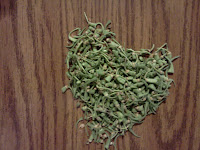 I like praying
when my hands
smell like the garden…
green and soil warm,
fresh bean-snap pea sweet,
earthy and close…
like I just clapped my hands
as You danced in the field
primeval and full of creation.

The other evening, I came home from school thoroughly glad to be heading into the kitchen.  I had earphones in, was listening to music I knew well, and sank my senses into preparing a meal for my community.  It was to be a variation on the couscous salad I described in this post.  I was trying out the basic salad with the addition of thinly sliced pork on top.

I'd like to think the music made a difference in how it turned out...somehow, the focus I had because of listening to music intensified the flavors and made the overall taste a bit deeper and more complex.  Perhaps I simply added more garlic, perhaps I tasted and adjusted a little more often, perhaps it was something to do with the ingredients... perhaps, like plants, a meal likes to be sung to--at least while in process?  Though, I hardly think my efforts in that area would be considered a gustatory enhancement.

I prepared, we prayed and we ate and we cleaned up, but my time in the kitchen was not done.  Earlier in the day I had received an email from a community member who had been given a sack of green beans from a teacher whose family has a farm.  I couldn't quite imagine adding beans to the salad I was preparing, but I promised to do something with them afterward so they'd be ready for the following day.

After rinsing them well, I sat down at the dining room table and began to pinch off the bean tops and bottoms, again accompanied by music (rather than the television, which was playing in the space just to the right of my shoulder).  Soon, my hands that already had the residual smells of citrus rind, garlic, and green onion, took on a subtle, earthy, leguminous, aspect as well.

OH, that smell...that memorable, wondrous smell... It became for me in that moment when inexplicable mystical aspects converged, as incense... a perfume of memory, an invitation to remember...

From my notebook later the following morning...

6:30 AM  Thank you for the kitchen time last night--for the joy of making dinner with music in my ears, but also for the beans... Yes, thank you for the beans.  I loved that time with you...and the memory-feeling of the smell on my hands.  The warm earthiness, sweet nature, green smell of warm sun and wet dirt.  The smell of our different garages when I was a child...of inside the branches of the buckeye tree at the top of the yard, of Nanny's kitchen and Grammy's backyard... Thank you for the reminder that we used to meet there and that you enjoyed it too....for the reminder that we found one another outside, marveling, touching, feeling, listening, seeing... and that we were for one another an absolute delight.  And still are.

I boiled the beans, chopped the handful of remaining mushrooms and tossed them in a skillet with olive oil, the juice of a lemon, and a good pinch of kosher salt...tossed the lot together...and said Amen.
Posted by Kimberly at 12:39 PM 4 comments: