Sometimes at a certain age or time people stop, look in the mirror, and with shudders of recognition pronounce “I am becoming my…!” For me, the recognition came in reading the notes. If you knew me, heard me, read me…and then read these folded samples of my father’s ruminations, there would be zero doubt of my 100 % direct genetic descent. The structure of his sentences, the dry straightforward delivery of humor that assumes the reader will either get it and laugh—or not, the word choice, even the selection of events he highlights…in the case of his second letter, his role in live-trapping a 500 pound black bear. It’s a story that took a page and three-quarters—I’ll save the details and simply say that it was an issue of public safety that led to it.

When I read his words, written by hand on notebook paper, I found myself looking into that mirror. We were both looking back—not the same person, but two faces superimposed with distinct but overlapped features. This was not a shock to me—in an inexplicable sort of way, it was actually a comfort to find so definitively someone else you recognize as part of you. It was especially important to me that I recognized it in his writing…something I see as such an extension of my thoughts and contemplations.

There are pages of reasons why the likelihood of this ever having occurred are rare. There are paragraphs of reasons why the connection I feel is not more complete. But to know that we are bound in our use of Word, in one of the ways we convey our take on the world…that is a thread that reaches not only the pen in my hand, but that tugs on my heart as well.
Posted by Kimberly at 12:42 PM 5 comments: 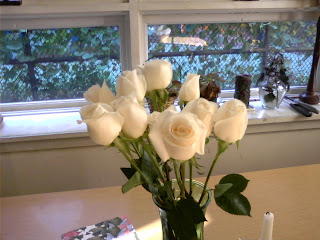 Please enjoy...I received them this afternoon. They are on the dining room table at the moment and are simply too lovely not to share. There is a blush on the petals that can not be seen here...it might be peach, it might be pink, and I rather like the fact that I can't quite tell... they bring me a sense of calm, quiet beauty that lasts. Beauty deep and mysterious, layered and organic, and accomplished only by being unabashedly what one was created to be.
Posted by Kimberly at 10:20 PM 6 comments:

Que te disfrutes...That you may enjoy

I say it that way because the first morning I was there, I awoke at four in the morning to face a sight of such incredible glory--a full wave of radiant orange and red, centered with a round glowing blessing of love, rising over the City. I could do nothing but weep in thanksgiving for the privilege of being awake at just that moment of its fullness.

Oh the beauty of these days... the sun sets in one window of the living room and rises in the other, alongside the bed where I am sleeping. I awoke at four this morning and there it was, so red and orange, rising over the city... a manifestation of God, for me. The colors, the beauty, the naturalness... I believe there there are some things in life that are simply gifts to enjoy- so tender and caring is the love of Jesus. In moments like this, I feel a complete liberty, a profound union with the omnipresent love of Jesus...as though my arms, my heart, my being, extend to the whole world.
Posted by Kimberly at 9:52 AM No comments:

I am a big fan of dip pens and ink. I love the process of cleaning the nib, finding the best color ink for the words to be penned, and baptizing the tip with chromatic potential. It is the next best thing to being able to head to a scriptorium myself and illumine the Word.

I like manual typewriters too. There is something about the satisfying whack of steel on paper, laying down its mark in the service of the Word. It is the next best thing to setting type with the colonial printers who painstakingly cranked out their broadsheet objections to taxation without representation.

I also like video cameras and computers. Last night I talked to a friend in Mexico for over two hours for free...we could see each other plain as day and hear each other's voices. It was the next best thing to being able to laugh with her in the same room, to speaking of dreams and somedays with her in the same space, and to giving her an actual hug...and it was fantastic

Sometimes the next best thing is nearly perfect and completely wonderful.
Posted by Kimberly at 4:10 PM No comments:

"I count myself in nothing else so happy
As in a soul remembering my good friends."
Shakespeare, Richard II

I was talking to a friend this afternoon, a former colleague whom I have known now for ten years. He has been through some significant change in the last little while and I wanted to check in and ask how he was faring on the sea. Though he would have every right to not do so, he asked about my life as well and genuinely wanted to know. We promised prayers for each other at the end of the call, each naming what the other could include in the offered intentions.

Later on, I was writing about this call for myself while in a favorite coffee shop and closed my journal entry with a simple truth that I wanted others to know.

I just finished an exceedingly satisfying meal and am sitting here at the computer listening to Eva Cassidy, drinking a mug of decaf, and feeling mellow, full, and thoughtful.

Baked chicken, so tender, coated in breadcrumbs laced with hints of pepper, salt, a kiss of Tony Cachere's, a little parsely. Zucchini sauteed in olive oil with chunks of white onion, coarse ground pepper, salt, and two healthy splashes of balsamic vinegar. Just before serving, a short handful of shaved parmesean tossed across the top. An uncomplicated green salad, and sourdough bread.

I wanted to eat so slowly...to enjoy the festival going on in my mouth...little hits of zing, the sweet onions, the profoundly chickeny flavor of the meat, the slight firmness left in the zucchini and the warm melted glory of fresh cheese, the tang of sourdough embracing the cream of butter.

The music and the coffee add to my mood of contentment. Eva Cassidy's voice is drawing from me a desire to do several things...dance, pray, write...but instead I sit with my eyes closed, nearly doing all of them at the same time. The coffee is the touch of a friend who understands this feeling.

God is so close at moments like this...settling beside me to watch the sun go down and the dreams rise up.
Posted by Kimberly at 7:38 PM 2 comments:

I unwrapped seven gifts before dinner tonight. I took my time with each layer, trying to imagine the care of the one who chose the wrapping and crafted the contents. Tonight i wanted to honor the process of receiving these gifts and preparing to share them by taking my time and by allowing each sense to be involved.

Each gift was delicately done up, ribbons at the top, neat, tidy, and complete. Each one was perfect in its own way, though not without blemish. Some of the contents of the packages had already been sampled, some had been missing from the very beginning. There remained a harmony, though, among the pieces that remained. Nothing could have been added to make them more sweet than they were.

As layers came free, some of the pieces broke open and spilled onto my hands. I could smell anad taste the glory of what lie ahead. The closer I got to the gift itself, the wrapping began to squeak and cling to what it was created to protect. I pulled and tugged seven times, clearing away the bows and ribbons that sometimes tangled themselves in the creases and cracks of the gift being offered to me.

When all were freed from wrappings, trappings, and finery, I found myself giving thanks. Thanks for creativity, thanks for imagination, thanks for nature,

and thanks for corn.

Nothing quite like fresh corn on the cob to make me remember summer days of my chidhood...being told to play outside, being off by myself, happily self entertained for hours on end. Remembering kool-aid ice cubes served in recycled yogurt cups at my grandmother's home, being given a paper bag of corn from the garden and another empty bag with the mandate to shuck before twenty minutes prior to dinner...days of listening to bull frogs, learning to tie knots from an old Boy Scout handbook, and figuring out how to siphon a bucket of water from the second floor kitchen balcony, across the driveway, down the side yard, to the apple trees just to see if I could. Summer days filled with trips to the library and cinnamon fireballs from the grocery store where my mother shopped while I was looking for books. Days filled with sorting the books and deciding the order I would read them, reading to the point of delicious gluttony, and wandering through and among trees, imagining what it would be like to fly or be invisible, pressing my face against earth and breathing in the scent of quartz, soil, leaf, God.

Yes, nothing like sweet corn to remind me of part of the tale of how I became who I am now.

Handcranked home-made ice cream and being charged with sitting on the board... now that's a whole other set of reminders.
Posted by Kimberly at 10:26 PM 8 comments: