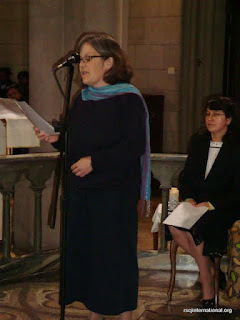 I don't know if it is everything that has happened in the course of this last year or something else, but I have to say that it feels like much more time than a year has passed since thirteen of us made final vows in Rome...But, whatever it feels like, the calendar says Yes, today is the one year anniversary! 30 January, 2011-30 January, 2012.

I have reflected much today on what the "forever" of my ring means to me...and the wearing of my profession cross.  And I realize yet again and also anew how deeply their significance touches my heart...that they are profoundly important symbols to me...symbols of what I want my life to say and more than say, to proclaim.

Thank you, God, for the gift of my vocation, for the life you have given me to discover and reveal your Love, borne in the heart of Jesus.

Off the top of my head

As I sat and sipped with Pablo Neruda the other day, letting my mind and heart go wander the fields they fancy while dancing with his verse, a surprising visitor came knocking upon my spirit...an unbidden yet interesting interlocutor that I never would have thought to bring into the conversation.... Emily Dickinson.

Unable to completely return to Neruda, I listened to her remind me of her own passionate response to good poetry...If I read a book [and] it makes my whole body so cold no fire ever can warm me I know that is poetry. If I feel physically as if the top of my head were taken off, I know that is poetry. These are the only way I know it.  Is there any other way?

I sipped, and tilted a bit, my head resting comfortably in its favored position for considering. Perhaps it was the freedom in the breeze from the ocean as I walked La Isla Negra or in between the lines of the Carta en Camino...but here in the middle of Missouri, in a coffeeshop and very much alive, I didn't think twice about responding to the question posed by a New England poet born in 1830 while reading words of a Chilean poet who died in 1973.  In fact, it was as though Emily Dickinson was asking me to respond.

Is there any other way?


I can understand your images and appreciate the passionate intensity they describe.  But, my body knows a different language of response.  Far from poetry taking off the top of my head, dear Emily...Poetry helps make me whole.  It draws me toward justice, toward love, toward God, toward being more human, toward freedom.  That is why I read you, and Pablo, and Walt; Mary and Wislawa and Mario; Leon, Octavio, and William; Naomi, Thomas, and Teresa; Nikki, Alice, and Langston; Gabriela, Hafiz, Rumi, and e.e. ...

That is why I write it too.


Ultimately, though, I don't think we are saying different things....just using different language to express the Word that is poetry.

And my other companion, Neruda...he waited patiently until I came back to him and then began again to make my spirit shimmy with his humid, ink-rich verse.

Perhaps a bit of this comes from recently celebrating the New Year by standing under the heavens with a scope in hand, marveling at the spectacle of celestial expansiveness.  Some might come from recently celebrating a birthday and spending time reflecting on how it is (and thanks to whom) that I have arrived to where I am currently and the unknown but intriguing and inviting "greater things than these" that lie ahead.  A bit might also come from a recent conversation with a student who asked me why I always carried a notebook and pen.  "Because 1. You just never know... and 2. With a couple of lines, mere strokes of a pen, whole new ideas can be created and shared, stories told, love proclaimed, worlds explored... and Because they can go anywhere, including where a computer can not. These are tools of creation, imagination, emancipation..."  I got a little wound up.

These recent events sparked the first stages of this post...the unconscious ordering of things in mind and heart that eventually becomes an outline of sorts.  That interior writing revealed itself in my windows this morning.

I awoke at my usual weekend time and rumpled my way over to the blinds just in time to witness the most extraordinary blue...deep, full...a blue to inspire and free, a blue to refresh even the murkiest thought or uncertain cloudiness of heart.  Standing there, stretching to my fullness in front of the windows to both offer more of myself to God and receive with openness and exposure whatever this newest day might bring, it suddenly occurred to me that the only reason I was able to do this--the reason I am able to wonder, wander, discover, and reveal, was thanks to the generosity of someone I will never know.

I had surgery in 2001.  Because of excessive bleeding in the operation, I needed to receive several pints of blood.  Blood that an unknown someone thought to donate.  In both tangible and mystical ways, I was not alone in that moment of early morning vitrine grace.

Another thing that can be done with paper and a pen... a record of thanksgiving.  So I wrote my thanks while sitting on the third tier of a newly adopted "thought spot" that also happens to serve a good latte.

Then I went to the public library.  And instead of just turning two score and two, you'd have thought I was twelve again.  One of the reasons I became a librarian was because of my experience in libraries as a child.  There was NO place more freeing to me.  Anything I could imagine reading about was there for my consumption, my touching, tasting in speech, feasting on with eyes and mind, contemplating in heart... So it was this morning.  I wandered everywhere and removed tomes with glee, building the mountain I would take home to climb! A transcribed interview with Frida Kahlo as well as a  book of photographs of her diaries, paintings, letters, home?  YES!  Julia Child's letters with Avis Devoto?  OF COURSE!  Two new cookbooks?  WHEE!  Portrait photography from Annie Leibowitz?  SURE!  A murder mystery?  THAT TOO!  A copy of one of my all time favorite books that I may or may not actually re-read, but it feels right to spend time with it again one way or another?  ADD IT!

I will likely read most of these while sitting in front of the windows in my room on a two cushion couch which has resting on it my journal, a notebook, and several pens in a small pouch.  And I will again give thanks for such adventure as my life holds.