Brilliant In the shadows 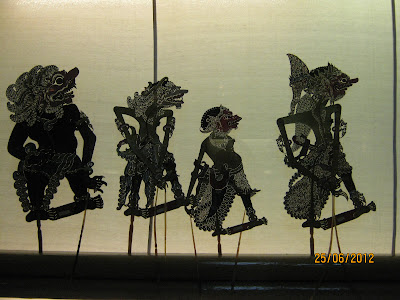 These are some of the wayang gedog, gedog puppets or shadow puppets, first created and used in 16th century Indonesia....which of course wasn't yet Indonesia.  I saw them yesterday on a visit to Taman Mini cultural center, here in Jakarta.  I was quite taken by them...mesmerized, really.  Carved from water buffalo leather,they have extraordinary detail--the tiniest curls of hair, the finest line of a moustache--and are sumptuously painted though the puppets would only ever be seen in shadow form from the other side of a screen.

It was a moment of...what? Profound connection...a certain roomy looseness and generosity in the Cosmos...a deep breath of Aha.... to see them.  When I saw these characters, these puppets, I could immediately see/hear the stories they wanted to tell--good versus evil, beautiful princesses, nasty witches...it was nearly as though the puppets spoke to me...or to the part of me that enters into and understands Story.  Story Universal.

And That was something that truly moved me...the puppets represent something that I understand already--but teach me even more about it, make it something more full, more whole, because it comes alive in different clothing, different languages, different contexts.  This element of relationship between what is deeply known/felt/recognized and learning even more about it by the experience of difference seems to me to have everything to do with freedom and integration... of expanding toward the infinity of God and becoming more deeply, fully, who I am as created by God.

And that expansion/contraction movement, the flow of inner~outer~inner, is the heartbeat of true Home...it is an exquisite, intricately unique and astoundingly beautiful dance between God and each one of us. 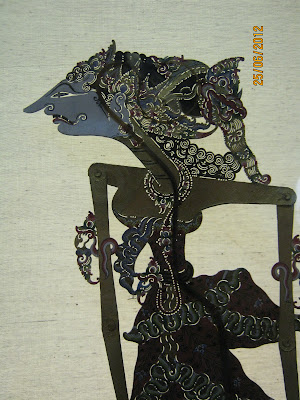 I renewed my vows in Indonesian yesterday!  It was a beautiful celebration of the Feast of the Sacred Heart...we had mass in the house here with the entire area minus two who are away--fifteen people, five nationalities...the local pastor celebrated with us.  There was a chorus of novices and postulants who sing beautiful harmonies together, accompanied by guitar...everyone sitting on the wooden floor and the altar perhaps at the height of your knees when sitting.  The front of the tabernacle in the chapel here is beautiful...it is a very thin layer of tough paper that looks like horn...it is batiked with an image of the open heart so when the light shines behind the chapel, you see the light through this door and the image is illuminated.  Quite something.  Afterwards, serious feasting on chicken, fish, rice, rice, rice, veggies, salad, juice, and a pound cake topped with shredded cheese--a nice flavor combo, actually.  And, to go with the cake, fruit salad flavored icecream that tastes EXACTLY like "Frozen Fruit Salad"  that my great-grandmother/mother used to make!!  We all then gathered in the living room for much laughter and a game involving everyone's names.  Just as has been true in other places, my name is a source of curiosity and amusement for people...it sounds Asian to many and reminds people of Kimberly Clark the paper company, King Kong, the ape...and is difficult to sort out first name from last.  I juggled fruit from the basket--my contribution to group entertainment... :)

The morning of the Feast (Friday) I was up when I have been all week--around 4.  I write for a while, I pray for a while.  That morning I was especially moved...because in the midst of the morning call to prayer happening all around me, there I was praying...and it being Friday, the holy day for both Muslims and Jews...I was adding my prayer to untold millions of others from major world faiths all happening at the same time... the image that came to me was of a shimmering, undulating wind that smells of spice and flowers, love and tragedy...a wind that blesses, refreshes, and can also part the sea.

The day before was a trip to the local market to buy food for the celebration.  As I later wrote--The market was something else...PACKED with people and stalls everywhere selling everything from diapers to dried fish, bins of chipped, fried radishes, peanuts, snakefruit, a whole variety of chilis, the biggest chunks of ginger I have ever seen (wrist to elbow), fashion head scarves, sandals of all sorts, incense, and a hot almond nougat wrapped in corn husk and sold by the 2X4.  There was more there than I could hope to describe that all came together to ears, nose, mouth, and eyes as a nearly overwhelming sensual cacophany... It was intense and it was amazing.

A New Corner of the Sky

These last days have been days filled with walking for miles each afternoon, long morning thinks accompanied by a strong mug of coffee, plenty of time to write, and lots of time to pray.  It actually hasn't felt so much that prayer has been a separate time, to tell the truth.  It has been a week of presence, of conversation with Jesus whether in Mass or stopping to notice a bee stuffing his sacs with sweetness, conversation while walking, conversation while listening, and the silent exchanges of love between those known to one another who can share quiet with joy and ease.

I include here some lines from my notebook...

If I think truthfully about my life...about the desire I have to serve the international Society, I realize that this desire to live "in geographic breadth" is a way to live aligned with the call of God in my life and how I most readily experience God.  It is like I have sought a coherent way to respond in living to the way I experience God...the way God has revealed God's self to me...the way I experience who God IS.


It feels organic, this desire...and something that is also part of the joy of being known by name by people who speak other languages and being able to respond... So often it is by circumstance and not intention that this happens...I am at a meeting here or there, someone is here or there visiting and I happen to be there too...I find something organic in this.  The spread of people I have known and that I know... I talk with everyone at school...moving between circles...knowing what is happening in Primary as well as in Eighth grade... I don't know, but thinking on it now, I am caught by the relationship between this gift you have given me and one of the facets I find most attractive about you.

I see you as a depth and a breadth...an Infinite in human form...and I am so attracted to this.  You are more than I can imagine and at the same time you are real, a human who walked and walks the earth and who has said to me "Nothing can separate you from my love."  Part of the importance of this, the strength of this reality is that I hear--and more than hear, I feel, that you are telling me that I too can live with a breadth and a depth of love...and that precisely That is your desire for me too--that at the same time I want to draw near to you, you are drawing near to me.  And when I don't remember, or don't believe it, or don't feel it, or when I fail or make mistakes--in those times, too, you persue me, you draw near.

Several days later, while praying and thinking about this image of Jesus as a breadth and a depth, a vulnerable Infinite in human form, a poem that touched me deeply returned to my heart.  In a biography of Janet Erskine Stuart, RSCJ, her biographer quotes GK Chesterton--

There are more ways than the wind knows,
or eyes that see the sun,
In the light of the lost window
and the wind of the doors undone.

For out of the third lattice
under low eaves like wings,
is a new corner of the sky
and the other side of things.

I think somehow that Breadth and Depth that I experience as Jesus, IS the other side of things....is what can be seen from out of the third lattice and under the low eaves... and seeking that new corner of the sky is entering the pierced heart, receiving fullness and eternity of life from the fountain of love that is there, alive, waiting, breathing, refreshing, cooling, offering respite... that the journey home might continue.

What a thrill that there is always more to discover...more to reveal and have revealed...