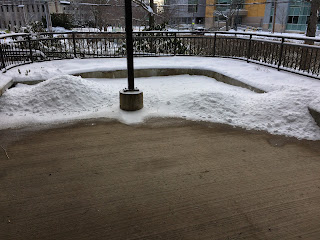 We had spring weather for Christmas… 10+ C. and sun, sun, sun.  Two days later my mouth was frozen into an “O!” and my Facebook post confessed that “My face had forgotten what winter feels
like!”


The mountains of snow created by the ‘shovel-off’ from the 2nd floor deck have begun on the first floor entryway/porch.  Last year, they reached the height of the deck itself a full floor up.  I remain ever hopeful that they stay mere hills this year while my muscles so far seem content with the reality. 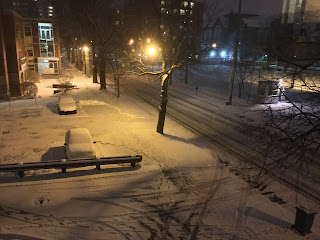 The Facebook post had me thinking...  “My face had forgotten what winter feels like.” What else have I forgotten or not forgotten that has come back to me lately?


I have not forgotten the small bell and stocking that my paternal grandmother crocheted for me over 40 years ago.  One goes on my inside doorknob and the other on the outside.  The original bit of ribbon my mother tied on the loop to distinguish between my brother’s and mine remains in place.


Each year I seem to have forgotten and get to rediscover the marvel of “snow-quiet…” The gentle muting unlike any other that comes with a fresh falling.


I have not forgotten the warm sigh of a chilly bedroom and extra blankets on the bed…their comforting weight pulled over a burrow hole just my size.

The uniquely particular design of each miniature crystalline sculpture is a joy to recall each winter too, as I find myself face to, well…flake.  It is trickier now with bifocals, but still, the wonder is there when examining the length of snow that has managed to balance on the line of a branch, on the top of a railing, or on the tip of mitten fuzz.


The blessings of winter are also not forgotten.  The blessing of a roof, of people who care about me and love me; The blessing of  cupboards that have delicious hot things for me to drink and warm myself from the inside out and the blessing of the proper clothing to wear for the weather.


Those things are not forgotten…and they are good to recall…and they are reasons for gratitude… because I also know that winter here is cold and that there is a reason that the song sings of a ‘bleak mid-winter.’  I know there are those who feel the cold...inside and out...and suffer for it in a variety of ways.


May my heart, strengthened and nourished so abundantly, be ever open, a refuge of warmth and respite and wonder, in this winter-time. 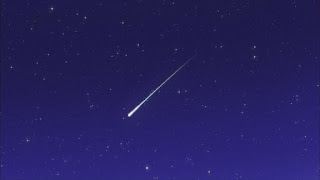 It is you we await,
Glory Child, brightest light,
in the places of hope,
in the shadows of fright.

Sing out Hallelujah,
set the bells pealing.
Come, Peace for the Earth!
Come, Mercy and Healing!

Be born in us;
Reveal to us;
Unite with us;
Strengthen us.

That we too may
give birth
to Love, to Love,
Amen. 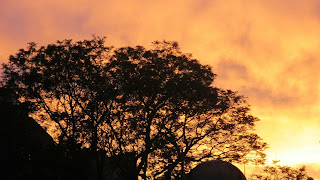 I live
and I sense
and I say
there is,
in all of This,
glory here!
Glory now!

I don't want to miss
this hope of here and now
that has been and shall be,
world without end.

So I add my amen
to the chorus of praise:

I align with the angels
and my voice I raise
In faith that
glory
is already
on Earth;

Every day of the year
can be a season of birth.

Kimberly M. King, RSCJ
(with thanks to Clara Malo, RSCJ for the photo)

A Response to San Bernadino and The Daily News

I will start by saying that I have fond memories of the smell of Hoppe's oil and melting lead. I loved sending the weight down the long barrel of my father's or grandfather's or uncle's or brother's rifle when they came back from hunting-- sending the weight down and tugging the wad of cotton rag through the barrel to clean it.  I have popped out primers, watched liquid metal be poured into molds to become bullets, and helped crimp shut the top of shotgun shells.  I have, in fact, drawn diagrams of shotgun shells and explained to others the science behind why they work and watched a deer head be prepared at the hand of a master taxidermist.


I have also driven a car that had its back end loaded down with many hundreds of rounds of live ammunition, multiple firearms, a collection of bows, a quiver of arrows, Ball canning jars of arrow tips, and a bag of knives. More on this in a bit.


And, I am sickened, absolutely sickened, when I read about or I see on the news or I hear about yet another mass shooting.


I am sickened because there are ways to reduce the likelihood that it will happen again and lawmakers consistently, obstinately, blindly, refuse to enact the necessary legislation in the all holy name of the Constitution.


I am sickened because we are now living in an age when planning and carrying out mass shootings seems like a right reaction to perceived injustice.


I am sickened because every time I see police in all of their riot gear, padded out, ready to "take out" or "shut down" or "neutralize" I hear the words "No, we can't help you because we are not in the habit of taking the private property of citizens."


That trunk full of weaponry and live rounds of ammunition? That was in the possession of a man who was actually barred by the state from having it.  And yet, he did. And I was trying to get rid of it responsibly. So, I called the police. And they were no help. None. Even with the paperwork from that same state that said he was not to have it.


These are the same police who I called to ask about whether they would come to the house if I found anything else when I was clearing out belongings. And they said no.


Sadly, I can't even cry out "UNBELIEVABLE." Because it isn't at all unbelievable.


And yet we wonder.  We consistently wonder and act surprised.  Or worse, accept these shootings as a part of our reality, as part of the price we pay for the right to own a gun.


What a sick, convoluted, interpretation of what a bunch of musket-bearers laid down in the Constitution.


And same time, people are actually getting upset over the recent Daily News headline that says "God isn't Fixing This."


I actually applaud the paper. And I think they are right.


I believe God cares beyond measure about humanity's well-being.  I believe God is indignant and aches terribly to see what is happening.  I KNOW I was praying mightily while driving that car...praying no one hit me...and I KNOW I have prayed over and again to do and to say what God would have me do and say in difficult circumstances...including when finding out that the police had no interest in helping me do the right, safe, thing.  I believe God calls me to Love. Calls me to be compassionate and just and the fullness of who God created me to be. God calls me to heal, to bind up, to visit, to care, to do my part.  God fascinates and astounds me and fills me with wonder at the generous experiences I have had with God's tenderness and fidelity.  "Nothing can separate you from my love" is a foundation stone for me and a call to go forth into the world and do what I can to make it better for as many people as possible.


And while I have given my life to this Love as a Roman Catholic woman religious, God will not stop the wrong guns from being in the hands of the wrong people.  God alone will not change our culture, our indifference, or the fact that some people do terrible deeds for reasons we may never understand and to which we respond with dropped jaws and open carry laws and petrified children.


God inspires people, strengthens people. Us. You, me, the lawmakers, the person in the checkout line buying another box of hollow points and another gun to add to their personal arsenal because it's allowed.


Are we called to something better, something other?  We must make that choice.  We must be the ones to fix this.  By the laws we pass, by the choices we make, by our attitudes, our decisions, by what we say, how we act, and what we call our neighbor to as well.


So yes, pray.  Pray harder than ever.... I do believe Love will ultimately triumph over evil.


At the same time, use the intellect, the reason, the sense, the capacities we have been given as human beings, to change the laws and systems for good.


Or, don't gape the next time another mass shooting happens.  It's on us. Not God.
Posted by Kimberly at 11:42 AM No comments: 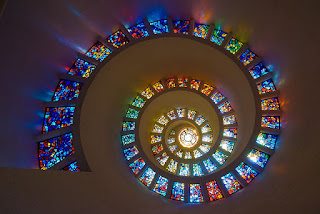 Oh glory, there is
a need,
such a need…

to leap alive
in a defiantly clamorous,
bold and passionate,
proclamation of birth:

The birth of Love come down
to breathe, sing,
dance, cry out,
in radiant, Hallelujah,
hope.